THE RETURN OF KWAITO HOMEBREWED IS 2WICE AS NICE 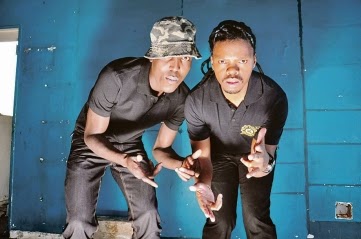 Promoting a debut kwaito album is not fo the faint hearted, thats what 2wice As Nice is doing with their album, The Return of Kwaito Homebrewed!
The group is made up of Molefi “Lova” Moyo from Kagiso and Innocent “Smaku” Thobeko from Mohlakeng, west of Joburg.
Lova said that their music will take people back to the original kwaito roots embraced by the likes of Mdu Masilela, Spikiri and Arthur Mafokate.
“With kwaito, you can never go wrong,” said Smaku.
“Our music is a mixture of kwaito and new school, including a bit of motswako so that we can cater for everyone.”
They have also worked with producers such as DJ Clock, Amon Mokoena, Brian Beats and Kidd Mokete. Their album is produced by DJ Homez, Master Kid and Brinjo.
“So far the feedback we’ve been getting has been amazing. Our first single, Dirty, is currently being doing well,” said Lova.
When asked about the importance of collaborating with other artists, Lova said: “Collaborations are good for any artist, especially when we work hand-in-hand without putting greed first.”
These up-and-coming kwaito stars said their energy, style and personalities were what made them popular with their fans.The Return of Kwaito Homebrewed will be released later this year.
daily sun.