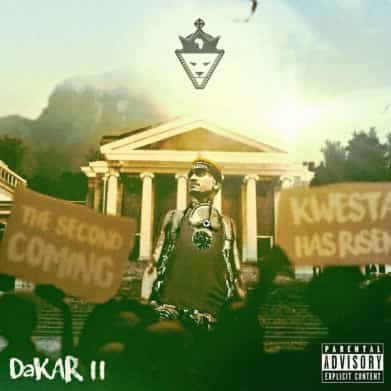 Local rapper Kwesta has a lot to celebrate. After taking away six awards at the South African Music Awards this year, sales figures reveal that the rapper has sold over 30 000 units of his incredible new record ‘DaKAR II’ – earning it platinum status. However, the album’s lead single ‘Ngud’’ featuring Cassper Nyovest has also reached a new milestone. The song is now officially five times platinum and it’s been streamed over four million times on YouTube – a massive feat!

Kwesta’s momentous platinum milestones are an accumulation of hard work, resilience and consistency over the past decade. In fact, the rapper has revealed that ‘DaKAR II’ is his most important piece of work to date – and the passion shows. The record has touched the lives of many South Africans and tens of thousands purchased the stars music. The album has had significant impact in the South African music culture since its release in February 2016. It has also opened up doors across the continent for Kwesta. What’s more important is the album’s crossover appeal. It’s not easy speaking in hip-hop to lovers of other genres, but Kwesta proved that if the message is strong enough, people will listen.

“We at Sound African Recordings and Sony Music Entertainment Africa are extremely proud of Kwesta and would like to congratulate him on his platinum milestones and recent SAMA23 wins. These accolades are a reflection of his perseverance and a testament to his loyal fan support. We encourage him to enjoy this time and reflect on his significant journey that has led to this point and to continue working hard, if not harder than he has ever done before,” expresses Refiloe Ramogase, GM of Sound African Recordings a division of Sony Music Entertainment Africa.

Naturally, this is a massive achievement for any South African artist and we are incredibly proud of the work Kwesta has released over the past two years. ‘DaKAR II’ will go down as one of the greatest hip-hop records in South African history.