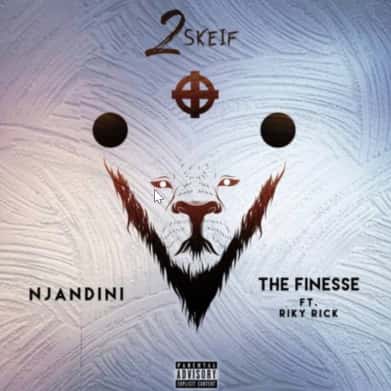 No stranger to the art of making good music, multi-platinum selling artist, Kwesta, is back for the number 1 spot in SA Hip Hop. It’s been almost a year since Kwesta offered local fans ‘Vur Vai’ and this coming Friday, he takes them back to the hood with a new two-track EP titled 2 Skeif with the singles – ‘Njandini’ and ‘The Finesse’ featuring Riky Rick.

Kwesta and Riky Rick were engaging live on Instagram just before the lockdown and little did we know that this informal chat about the state of local music would lead to ‘The Finesse,’ the first track that they have collaborated on. On the track, Kwesta expresses how he has kept his foot on the game’s neck much like the late soccer legend, Scara Ngobese. Riky’s verse on the song solidifies the Finesse that these two hip hop giants carry.

It’s not really an EP, it’s just two good songs that I wanted to give to the world, so I am shying away from calling it that, the one song is very personal as it’s for my people by their own Kwesta aka uNjandini. The other one is more smooth and was produced by Gobi Beast featuring Riky Rick – said Kwesta

The other side of ‘2Skeif’, you’ll find the Mzonkonko influenced street banger, ‘Njandini’ produced by the Makwa, who gets a shout out on the song for always blessing the masses with world-class production. The charming duo has given us smash hits such as Ngud’, Spirit, Vur-Vai, and Kwesta’s recent international features ‘Run It Up’ and ‘I Came I Saw’.

uNjandini, is a person who lives by their own rules, they are from the school of do or die. He is the guy who has breakfast in the suburbs and has iKota for lunch in the hood and drinks champagne but will still drink a quart of beer with gents elokshini, uyangthola? – Kwesta

For those that are not familiar with uNjandini it is a character that most people, who grew up in South African townships, glorified for not living by the rules. They are usually the bravest among the pack. uNjandini is always the one willing to do whatever it takes to reach a goal, even if it means going against popular opinion. He/She outsmarts their opponent by initially playing the fool but they will always have the last word. Even though the name has a notorious reputation, uNjandini is also the person who has taken their perceived weaknesses and made them strengths.