MUSIC IS IN THEIR VEINS! 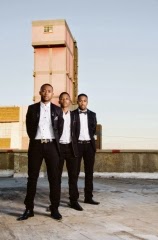 They have just released their debut gospel album titled Step Up.
Their father, award-winning gospel musician Reverend Benjamin Dube, is the executive producer of their album.
The three brothers Mthokozisi (25), Sihle (23) and Buhle (17) said people had asked them to release their own album.
This was after they heard them singing with their dad on his song Holy Holy.
Sihle spoke about how the group was formed and he  said: “I was probably the first one to catch the music bug.
“I think I was 11 years old when my two cousins and I started singing with my dad. Then Buhle decided to study music at the National School of the Arts.”
Mthokozisi said: “I have always been the shy one. It was only after I saw Sihle singing that I gathered the courage. I started singing when I was about 16 years old.”
He said after matric he studied sound engineering at the Academy of Sound Engineering for two years and has been working in studio with his father since then.
Buhle said they all like to write and when the time came for them to work on an album, they had a lot of material to choose from.
He said: “I was inspired to write songs to encourage people to go out into the world. “I want them to give glory to God in everything they do. This song also lifts us up to keep doing God’s work.”
Another popular song on the album is More, written by Mthokozisi.
They have just finished shooting a music video for their single and I cant wait to see it…
daily sun
Booking Benjamin Dube Contact: 071 519 9905 OR booking@djsproduction.co.za
Booking Dube Brothers Contact: 071 519 9905 OR booking@djsproduction.co.za ﻿
﻿
Back