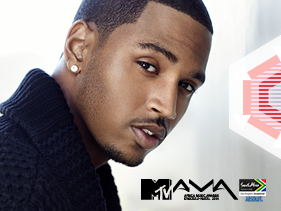 The MTV Africa Music Awards (MAMA) KwaZulu-Natal takes place at the Durban International Convention Centre (ICC), on Saturday 7 June and will be broadcast around the world on MTV, MTV Base, BET International and affiliate stations. Stand-up comic, film and television sensation Marlon Wayans will host the 2014 MTV Africa Music Awards brought to you by KwaZulu-Natal Province and supported by Absolut and the City of Durban. South Africa Tourism is also a key partner to the awards.

Award winning R&B star Trey Songz is a chart-topping Grammy-nominated singer-songwriter, producer and actor whose crowd-pleasing blend of hip hop, R&B and pop has spawned ten years of inspired R&B magic including the Grammy-nominated “Can’t Help But Wait”, club banger “Say Aah”, the sultry “Invented Sex”, “Bottoms Up (feat. Nicki Minaj)”, the #1 single “Can’t Be Friends”, and chart climber “Na Na”. His 2012 album “CHAPTER V”, the follow up to “Passion, Pleasure and Pain” (2010) was released in August 2012 and debuted at #1 on the Billboard charts with chart-topping singles including “Heart Attack” and “Dive In”. Trey’s sixth studio album “TRIGGA” is due out later this year and promises to be his most personal album to date.

Commented Trey Songz, “I’m excited to finally be going back to Durban. I went once just for a day but this time I’m spending more time to get to know the people and the culture. I can’t wait to perform at the awards show, especially since it’s live for the first time ever. It’s going to be amazing to feel the energy when I’m on that stage and see some of the best talent that Africa has to offer.”

Commented Alex Okosi, Senior Vice President & Managing Director, Viacom International Media Networks (VIMN) Africa, “We are thrilled that Trey Songz will be joining the stellar line-up in Durban and KwaZulu-Natal on 7 June, and contributing his own signature R&B style to the wide range of music genres represented at the 2014 MTV Africa Music Awards.”

Celebrating musicians and achievers who have made the most impact on African youth culture throughout the year, MAMA 2014 will, for the first time ever, premiere LIVE across Africa on MTV Base (DStv Channel 322) and MTV (DStv Channel 130) at 21:00 CAT. The show will be amplified on radio by media partners Gagasi FM, Yfm and Capricorn FM.

In this year’s newly introduced lifestyle award categories, Chimamanda Adiche, Omotola Jalade Ekeinde, Trevor Noah, Lupita Nyong’o and Yaya Toure are nominated for Personality of the Year. Clarence Peters, Leti Arts, Rasty and Anisa Mpungwe are nominated in Transform Today by Absolut. The nominees for Best International Act are still to be revealed.

With hundreds of thousands of votes already cast, public voting for 2014 MTV Africa Music Awards continues online at www.mtvbase.com until midnight on 4 June 2014. The winners of the MTV Base Leadership Award and Best Video are chosen exclusively by MTV Base. Voting for Song of the Year continues up until the show on 7 June.