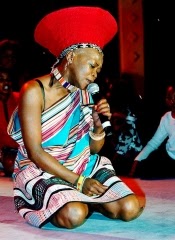 The late Brenda Fassie was hailed as the queen of pop music and the Madonna of the township, and she did live up to the hype that came with the titles.
Having sold millions of albums and won numerous awards, Brenda is an African icon.
Today, 9 May marks 10 years since her death. Her fans and those who were closer to her are still keeping the light burning in her memory.

Brenda was known as a controversial singer who spoke her mind and contributed a lot to the history of Mzansi music.Her song My Black President is still popular in various political gatherings.

Winnie Khumalo who looked up to the singer and also played her in Mabrrr The musical two years ago, said its difficult when she is compared to Brenda.

“I know how to imitate her very well and some people perceive this as a way of trying to be her. I can never be Brenda but I want to make sure that I keep her spirit and legacy going through my music,” she said.Winnie has recently released an album that features two of Brenda’s popular songs, Too late for Mama and Higher and Higher.

“I decided to redo these songs not only because I love them but because they speak to most of her fans.
“I loved Brenda even with her flaws. “I decided to look for the good in her,” Winnie said.

It stars the late Lesego Motsepe and Winnie Khumalo both playing the role of Brenda Fassie.
Jerry said Brenda was deservedly a South African icon whose influences stretched throughout the country and across the continent.

She said that there is no day that passes without her thinking about Brenda’s humility. “Brenda and I got really close five years before her death. I saw her just a week before she collapsed. She would not look me in the eyes. She was very angry with me because I had not been visiting her. “But her last words to me were that she loved me,” Zenzi said.
daily sun.