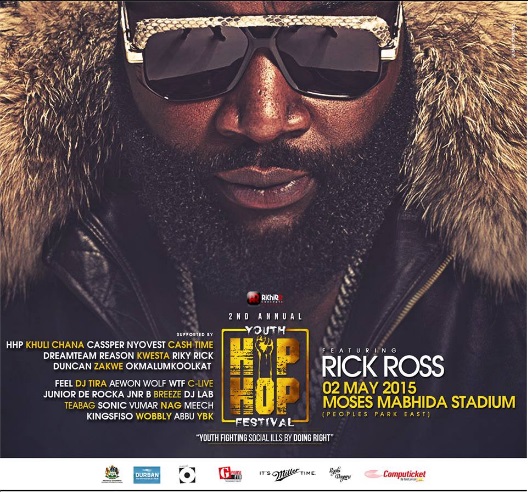 The annual festival will take place at the Moses Mabhida stadium on the 2nd of May this year and will feature some of SA’s hip hop royalty, in addition to headline international artist Rick Ross. Having previously performed in Cape Town and Nelspruit in 2010 and 2013 respectively, Durban youth will finally get their turn to see him live on a local stage.The first Youth Hip Hop Festival took place last year with over 15 live acts performing to over 6000 people. This year promoter Richie R Concepts decided to spice it up a little bit and add an international act to the festivities to attract a bigger audience.

The festival hopes to attract over 15 000 revellers this year.Excited about the upcoming youth festival Ethekwini Municipality mayor, James Nxumalo believes in uniting youngsters through music.“‘Music had proved is the best tool to reach the youth over the ages.“By government supporting initiatives like the Durban Youth Hip Hop festival, we hope to educate our young people but also empower them to always make the right decision, even if nobody is watching,” Nxumalo said.